Clinical Center at the National Institutes of Health in Bethesda, Maryland. (Photo by Larry Luxner)

Rare diseases affect about 30 million Americans — roughly the same number as those with type 2 diabetes. Yet only 5 percent of the estimated 7,000 rare diseases known to science have cures or treatments approved by the U.S. Food and Drug Administration (FDA).

Raising awareness of those illnesses and highlighting the promise of new therapies and technologies took center stage Feb. 28 — Rare Disease Day— at an all-day eventhosted by the National Institutes of Health (NIH) in Bethesda, Maryland.

“We still don’t have enough treatments, but the path forward seems clearer than it has been for the past 30 years,” Francis Collins, MD, PhD, NIH director, told 900 delegates at the meeting, which was livestreamed. Clinical Center at the National Institutes of Health in Bethesda, Maryland. (Photos by Larry Luxner)

For example, the Developmental Synaptopathies Consortium (DSC) studies three distinct rare genetic syndromes that often cause autism and intellectual disabilities, and which are known to impair similar pathways in the brain. Although research on the genetic and biological bases of these diseases was underway long before scientists established the consortium, their collaboration helped develop a biosample repository, as well as standardization of clinical trial protocols.

This paved the way for a study focusing on prevention and a world congress to disseminate information.

“This has been surprising and transformative,” Sahin said at the NIH event. “We learned from each different patient advocacy organization, and we can leverage that with other disorders.”

A full and detailed listing of these 22 research networks — which focus on diseases from ALS(amyotrophic lateral sclerosis) and cystic fibrosisto Rett’s syndrome, idiopathic bronchiectasis, and ANCA vasculitis— can be found here.

By partnering with patient groups, consortia help researchers get the word out about clinical trials through patient education conferences, websites, and social media. In turn, the groups help to shape research at multiple points — from designing trials and recruiting patients to disseminating scientists’ findings and influencing policy.

Ellyn Kodroff, a patient representative for the Consortium of Eosinophilic Gastrointestinal Disease Researchers, recalled how she found herself on a call with doctors wondering if they’d even listen to her. Instead, she learned that her participation had actually changed the direction of their research. 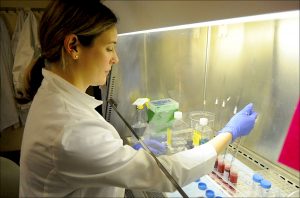 An NIH scientist separates lymphocytes from a blood sample.

“It was an incredible feeling to know that every step of the way our voice matters,” she said. “We could really talk with doctors and let them know what it is like living with the disease.”

For example, sickle cell diseaseresults from a single mutation that causes red blood cells to form an abnormal sickle shape. Some children have been successfully treated with blood stem cells or bone marrow transplants from a matched donor.

Gene therapy may soon let patients become their own donors. Gene-editing technologies such as CRISPR can target a specific stretch of the genetic code to correct mutations in blood stem cells before returning them to the patient. A clinical trial of such a potential editing therapy — CTX001, being developed by CRISPR Therapeutics and Vertex Pharmaceuticals — is now recruiting several dozen patientsat its Tennessee site.

Others like LentiGlobin, being developed by Bluebird bio and also in a clinical trial enrolling patients with severe disease, use a different delivery approach — that of inducing via a vector a modified gene into a patient’s blood or bone stem cells.

CRISPR is “a hugely powerful tool to start thinking about correcting genetic disease, and I’m excited about the prospects,” said John F. Tisdale, MD, chief of the Cellular and Molecular Therapeutics Laboratory, a unit of the NIH’s National Heart, Lung, and Blood Institute. “But we have a lot to learn.”

Tisdale said that before gene therapy moves from the lab to the clinic, it must overcome many regulatory hurdles. Other challenges are related to manufacturing the viruses — used as vectors to deliver the gene therapies — and how to make clinical trials and treatment accessible to all patients.

“I would say that as a patient, you are your own best advocate — especially if you have a rare disease. It’s imperative to do your research,” said Tesha Samuels, a sickle cell patient. Her research led her to the NIH website.

After enrolling in a 2014 trial, Samuels periodically reached out to her contact to see if other trials were available. When there was, she decided to move forward.

“In any clinical trial, family support is imperative,” she said, adding that her family developed a schedule in order to take off from work to be there for her.

Yet clinical trials must be accessible to all patients, said Helen Hemley, program manager of the CARE Research Center at Boston’s Massachusetts General Hospital.

“We need representation in clinical trials across races, across ethnicities,” Hemley said at the NIH event. “I think communicating is powerful in letting people know about the opportunities.”

The pace of progress is also a challenge — but one that can be overcome, said Christopher Austin, MD, director of the National Center for Advancing Translational Sciences (NCATS)at the NIH.

“At the current cure rate, it will be 2,000 years before we never have to hear the words, ‘There’s nothing more that I can do for you.’ That doesn’t have to be an acceptable answer,” he said.

“It’s not work on your own puzzle piece, but how you fit into this proactively,” he said. “It is a gigantic and ultimately beautiful jigsaw about how we are all together.”